The proteomic analysis of formalin fixed paraffin embedded FFPE tissues often employs technologies such as Liquid Chromatography (LC) and Mass Spectrometry (MS), which are considered as important tools in protein biomarker research. Fixation of tissue samples using formalin leads to extensive inter- and intramolecular crosslinking among proteins in these tissues, which hampers the proteome analysis of these samples. Therefore, a substantial need exists to develop methods and procedures for this technology to discover new protein biomarker candidates with diagnostic or therapeutic potential. Methods: Two protocols were used in this study for protein extraction from cervicitis FFPE samples. First protocol used xylene in deparaffinization and rehydrated samples with graded series of ethanol. Then, samples were incubated in different temperatures, lysed with buffer and subjected to sonication and centrifugation. Afterwards, samples were reduced and alkylated then followed by trypsin digestion. The second protocol used S-trap buffer directly on FFPE slices then followed by series of incubation and sonication. Eventually, reduction and alkylation of samples were performed to be followed by trypsin digestion. Finally, the protein extracts were subjected to LC-MS/MS analysis. The data were analyzed by scaffold and PANTHER tools. Results: The number of proteins that shared by these protocols were 734 and the S-trap method was higher in unique protein identifications (n= 338) than the direct trypsinisation (DTR) method (n= 276). Most of the proteins that missed in DTR methods were mainly located in organelle, protein-containing complex, and membrane. While there were no highly differences between the numbers of extracellular proteins from both protocols. Conclusion: The S-trap method can be considered as a promising method in FFPE proteomic studies because there is no need for highly experience and required short time to be performed. More important proteins such as membrane proteins were less missed in this protocol which is considered as a pivotal method in membrane proteomic study. 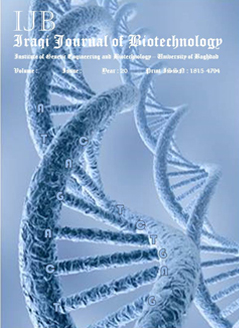 Published
2021-01-13
Issue
Vol 19 No 2 (2020): The second issue of the nineteenth volume of the year 2020 of the Iraqi Journal of Biotechnology was published in October
Section
المقالات