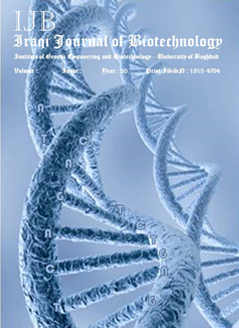 The third issue of the eighteenth volume was issued in January of the year 2019 for the Iraqi Journal of Biotechnologies. The number included eleven valuable research papers: its topics varied to include research in applied medical sciences, genetic engineering, molecular genetics, microbiology, and biotechnology. Where the first research is the scientific article review  dealing with genetic changes of Hodgkin's lymphoma and its causes and the risk factors that lead to their occurrence, the second research dealt with the evaluation of the glmM gene for the diagnosis of H. pylori, where this gene was used in molecular diagnosis in comparison with other methods which are rapid urease test and  with histopathological diagnosis. With regard to the third research, a search for genes related to polycystic ovarian syndrome in unmarried women in Baghdad governorate, especially the estrogen receptor gene 2, the fourth research dealt with the detection of the prevalence of the efflux pump gene in the MRSA bacteria that are isolated from from Iraqi patients, Also, the fifth research was poured into the same specialty by studying the effect of peppermint oil and anti-colistin on some genes of isolated bacteria from patients in Baghdad governorate hospitals. The sixth research was concerned with finding the relationship between multiple patterns and forms of the KRAS gene at the mutation site rs 712 G> T with a ratio  of the incidence of breast cancer in Iraqi women, while the seventh research dealt with the effectiveness of the chalcone substance, which is used as a flavoring agent as an anti-biomembrane substance that is considered one of the virulence factors for Staphylococcus aureus methicillin resistance bacteria, the eighth research dealt with the effect of bacterial infection on the Genital  tract on infertility in men also examined its relationship with some parameters of semen. As for the ninth study, it searched for the use of several methods in extracting and determining the quantities of deoxyribonucleic acid from the surfaces of cellular phones for use in the forensic study, the tenth study dealt with the study of gene expression of the e NOS gene in patients with Iraqi oligospermia , and finally the eleventh study studied The average level of micro RNA-101 levels in Iraqi patients with hepatitis B virus